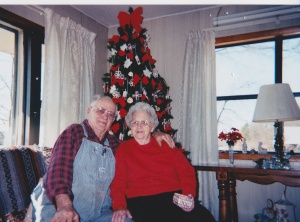 Grandpa Luther was never at a loss for words, and often his words would cut through all the pretense of pride and focus on the main thing. For him the main thing was his witness for the Lord Jesus Christ. Whenever Cathy and I were with either Grandpa or Grandma Luther the conversation invariably led back to Christ and His redeeming work on the cross.

Grandpa never met a stranger, and he would often initiate a conversation with someone he didn’t know by saying something like, “I’ll bet you didn’t know I have two birthdays. How many birthdays do you have?” Regardless of the answer, Grandpa used his opening line to give his natural date of birth, and then tell when he was born again into the Kingdom. His follow-up question was always, “Have you had your second birthday?” One of his favorite opening lines when he met a woman was, “I know Someone who loves you.” Usually she would ask, “Who is it?” Grandpa followed with, “Jesus loves you so much He died on a cross to save you. Have you been saved?” For Grandpa and Grandma Luther every encounter and every conversation led to Jesus.

Grandpa told me about an encounter he had with a man while on a shopping trip with Grandma to “Walmarks.” He always called the giant chain “Walmarks,” and to this day it is difficult for me to remember it is Walmart. Grandpa was waiting for her to finish shopping and was sitting on a bench in the foyer of the entrance. He said  “an old man” came in with his wife and while she shopped he sat down beside him. I asked Grandpa just how old the “old man” was, since Grandpa was in his late 80’s when he told the story. He said in his usual loud voice, “Oh, I don’t know. Probably fifty or sixty.” Grandpa was hard of hearing despite wearing hearing aids which never worked very well for him.

The two of them sat without speaking for five or six minutes when Grandpa said loudly, “Where do you go to church?” The man said quietly, “I’m a Jehovah’s Witness.” Grandpa had no idea about Jehovah’s Witnesses nor the doctrine they do not believe in the divinity of Jesus Christ. To Grandpa one was either lost or saved and was either a Christian or a non-Christian. When the man told Grandpa that he was a “witness for Jehovah,” Grandpa responded with, “You’re not much of a witness! We’ve been sitting here for over five minutes and you haven’t said a word about Jesus!” Grandpa said the “old man got up and left.”

In Grandpa’s world everything was either black or white. If you love Jesus and claim to be His witness, you need to tell everyone around you how wonderful He is, and He will save you if you are lost. Grandpa didn’t intend to be unkind to the “old man,” but was challenging him to be more faithful. Grandpa and Grandma Luther lived and witnessed on a different level from any other Christians I have ever known. Because of their continuous and faithful witness they led many thousand people to a saving knowledge of Jesus Christ. When I think of their witness I am convicted that what Grandpa said to the “old man at Walmarks” can also be said about me.