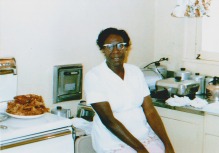 Growing up in South Arkansas in the 1940’s and 1950’s exposed me to a cultural setting which has long since passed away. In many respect life was simple and reduced to such burning questions as how late will I be able to stay up tonight, and what sports will I participate in tomorrow, and with whom will I be playing? There was an entire culture of young people living in El Dorado whom my friends and I never considered joining in any kind of activities. We were isolated from blacks kids not necessarily by our choices, but by society over which we did not have control. We lived in separate neighborhoods, attended separate schools and were separate in every aspect of life including hotels, restaurants, movie theaters, grocery stores, department stores and even doctor’s offices. I participated in varsity sports in high school and college and never competed against a black athlete during those 7 years. The only significant contact I had with any black person were with those who worked in our home over a 15 year period.

Mose Graham began working for our family as a yard maintenance man in 1947 when I was 8 years old. Over the next 15 years which he worked at our home he became one of my best friends and confidants. It is sad to remember this, but a black man was never identified as “Mister.” A term of respect which was frequently used was “Brother;” thus Mose Graham was known to my family and me as Brother Mose.

Brother Mose was in his late 40’s in age when he began working for us, but he always seemed to me to be an old man. He was five feet eight inches tall, weighing about one hundred and fifty pounds and with thinning grey hair. Unfortunately he had poor dental hygiene and had one single incisor in his upper gums with multiple other upper teeth which were in poor condition. He called his front tooth a “snaggle-tooth,” and often bragged he could strip a barbecued rib as fast as anyone with a full set of front teeth. His lower teeth  were also in poor condition. Dental care was out of the question for Brother Mose since there were no black dentists in the area, and to my knowledge white dentists did not accept blacks as patients.

Brother Mose was always cheerful, and I never saw him angry or upset. When he was working or concentrating on anything he was always humming or singing one of several familiar tunes. His favorite song was “Precious Lord,” and by the time I was ten years old, I had sung it with him so often I knew every verse. There were other songs he sang, and I remember them as well. Even now more than seventy years later when my sister Marilyn and I are together and reminisce about Brother Mose, we will occasionally sing some of the songs we heard and learned from him. His only vice I remember was playing cards in a tavern called Lonnie Mitchell’s which was located in the black section of town known as Saint Louis. His favorite card games were Pit-T-Pat and Coon Can. He never taught Marilyn nor me to play either game,  probably because he didn’t want to corrupt us in some way.

In addition to Brother Mose our family was privileged to have a maid working in our home. During the time of Mose’s employment we had several different women doing domestic housework for us, but my favorite by far was Sister Bobbie Fike. When I remember her I think about her fried chicken and hot-water cornbread (hush puppies). They were absolutely delicious and close in quality to our Mom’s. and I think it was Sister Bobbie who taught my Mom to cook them so well.

Most of the time she and Brother Mose got along with each other pretty well, but occasionally she would get aggravated with him. It bothered her how slow Brother Mose moved from one place to the next, and how long it took him to complete a task. It didn’t seem to bother him at all, and when she fussed and fumed he would respond with a “yessum, you sho’ is right.” A characteristic response of Brother Mose when he was some distance away and called by Mom or Sister Bobbie was to answer with a high-pitched, owl-like “Hooo.” No one else could make a comparable sound, and I could recognize it from three hundred to four hundred feet away.

I dearly loved Brother Mose and Sister Bobbie, and when I was with them and could get them to stop their work, I would ask about “the old days” and different people in their lives. Often I could get them to sing their favorite songs, and I would sing with them. Sister Bobbie’s favorite song was, “There Will Be Peace in the Valley.” If I kept them singing too long or asking too many questions, either one or the other would say, “Masta, we gots to get to work. Miz Mo’ will be comin’ any minute now.” I didn’t know the salary Brother Mose and Sister Bobbie received for their work , but I know it was not much. Every week when I was given my allowance of one dollar from Pop, I always gave ten cents to each of them. I don’t think Pop knew of my gifting, but feel certain he would not have objected. I never asked them to call me “Masta,” but this was the name they gave me. By the time I was in junior high school and certain I was going to be a doctor they started calling me “Docta” or ‘Docta John.”

Brother Mose and Sister Bobbie were in my life prior to the civil rights movement and  desegregation, but those laws would have not changed my relationship with them. I never thought of them or treated them as anything other than family. It sorrows me to think how shamefully blacks were treated, and had it been in my power all racial barriers would have been torn down years before. The truth is when we allow our precious Lord to take our hand and lead us on, all prejudicial and racial barriers will be broken down. At their fall there will be peace in the valley about which Sister Bobbie, Brother Mose, Marilyn and I frequently sang.