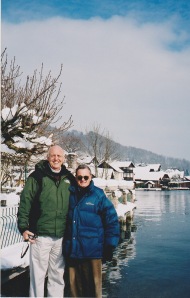 For those who don’t read German, the title says, “My dear friend Alfred.” I met Alfred Fischer in 1958 while in my second year of college at the University of Arkansas. I was a member of Sigma Alpha Epsilon fraternity, and one of the better traditions of our fraternity involved an annual ongoing relationship with an international student. Each year a selected international student would have lunch each day at our fraternity at no cost to the student. The purpose was to expose us to different cultures and broaden our world view. That year a student from Austria was selected to dine with us daily, and it was Alfred Fischer, who was a Fulbright Scholar and a pre-law student from Linz, Austria.

The first day I met Alfred, I quickly noticed that he was quiet and reserved but had an open and receptive attitude toward new friendships. Since I was taking German as my pre-med language requirement, I was certain that a close friendship with him would greatly benefit me. His English was excellent, so I couldn’t teach him very many language skills, but I knew I could tell him lots of good Southern stories and teach him some South Arkansas dialect to which he had never been exposed. As I recall, before the year was over he was using the phrase, “y’all.”

Alfred did spend a lot of time tutoring me in German, and I did very well in the course. I know for certain that I could communicate in German better than my classmates, because Alfred and I frequently spoke to each other in German. I was not able to carry on a prolonged dialogue, but it was fun for me since the only other language course I had taken was Latin as a sophomore in high school. I was hoping that one day I might be able to travel to Austria and Germany and use my newly learned skills.

Several times during the year I invited Alfred to come to El Dorado to experience life in an American home, and he gladly consented. Mom and Pops thoroughly enjoyed having Alfred visit, and on one occasion we even took him to a hunting camp for an overnight stay. Pops also took Mose Graham to the camp to help with the cooking and the clean-up, and Alfred was intrigued with Moses’ ability to tell stories of life in the South from a black man’s perspective.

At the end of that school year Alfred had to return to Austria to complete his legal training, but we promised to stay in touch. As a result of Pops generosity, he promised if I could get accepted to medical school after 3 years of college, he would finance a 3 month trip to Europe for me in the summer between college and med. school. Needless to say, I studied much harder during that 3rd year and was accepted to enter medical school in the fall of 1960. Alfred and I made plans to meet during that summer trip and  spent 2 weeks together travelling in Austria and Italy together.

I had gone overseas with a friend from El Dorado who was several years older and our interests in travelling and the sites to visit were different. We had each bought a Eurail Pass which allowed us to travel on any train in Europe for any distance for a period of 2 months. We decided to split up, and he went to Rome to see the Summer Olympics of 1960. I didn’t want to go there because it was extremely expensive despite the fact that I love track and field events. It was about this time that Alfred and I connected and spent about 2 weeks travelling and camping in Austria and Italy. We did spend 4 days with his Mom and Dad in Linz and that experience will be for another post. When we parted and I was returning to the states to begin my medical training, I wasn’t sure we would ever be able to meet again.

Alfred completed his legal training with a doctorate degree to begin his practice of law and subsequently became a lower court judge. It always pleased me to address my letters to him as “Herr Doktor Alfred Fischer.”  When I completed my surgical training in New Orleans, Cathy and I were in the process of moving to Valdosta, Georgia for our active duty service in the Air Force. I had to take a 3 week training course in Wichita Falls, Texas and because Cathy was pregnant with our daughter Mary Kay, she went to Fort Lauderdale to spend that time with her parents. While in Wichita Falls, I got a phone call from Alfred, and he said he was coming to the states for an international Rotary meeting and would be in Dallas for a few days. That worked out perfectly because I only had a 2 hour drive to meet him and we drove him back to Wichita Falls for a 2 day visit. It had been nearly 10 years since we had seen each other.

Cathy and I were able to visit with Alfred and his wife Carmen and their 2 children on 2 separate occasions when we were in Austria on mission trips. Alfred has been to the states on 3 other occasions with his work with the Rotary Club of Linz, and on 2 of those trips, we were able to meet again. He happened to be in El Dorado in 1999 and attended the retirement  party given me by my office staff of the Surgical Clinic of South Arkansas. That happened to be 40 years almost to the day when we first met at the fraternity house in Fayetteville.

God has been so gracious to give me a life-long friend like Alfred. We have had many and varied great conversations through the years. I  had the privilege of telling him how God changed both Cathy and me when we were saved in 1977, and just how that happened and what it meant. He remarked on several of our visits, how much I had changed, and it opened the door to tell him just how much God loves him and wants to have a personal relationship with him. I trust that when we leave this earth after our labor is completed, that “mein lieber freund” Alfred and I will have another reunion that will be far much greater than any one before.