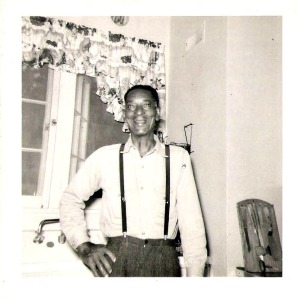 Brother Mose was the central character of many of the interesting and funny stories of my childhood and youth. I spent so much time with him and knew him so well, that even now as I recount those experiences, I find myself laughing and enjoying them all over again. My sister Marilyn, her husband George and I are the only remaining ones in our immediate family who knew Brother Mose, and we love reminding each other about him and the impact he had on us. I know Cathy and our children have grown weary at times hearing me tell stories about Brother Mose and Sister Bobbie, but that generation has passed forever from the scene, and our children will never experience some of the good things that we did. Our children did know Lillian Singleton, and I have written some remembrances we all had of her.

Even though Brother Mose was hired to do yard maintenance and heavy cleaning in the house, he would occasionally answer the telephone, and some of his phone conversations were the source of unusual and often hilarious situations. Not infrequently he would answer the phone with the following; “Dr. Mo’s residence; Dr. Mo’s porter speaking.” I don’t know where he came up with that title, but Pop didn’t mind, and even on one occasion Pop jokingly introduced Brother Mose as “my Footman.”

This particular telephone conversation occurred in the early 1950’s when a recording was available of a hit song of Jimmy Boyd singing, “I Saw Mommy Kissing Santa Claus.” The record was so popular that the record stores could not keep up with the demand, and our local store, Samples Electric City was no exception. Mom had begun trying in the early fall to have the record available for the Christmas season and had placed her name on a long waiting list to purchase the recording. It was taking so long to get the record that she said she had forgotten about it.

Mom had a meeting scheduled in early December in our home with some of the ladies from the First Baptist Church, and she had asked Brother Mose to remain in the kitchen to help with the serving and clean-up. The telephone rang and Brother Mose answered with his usual greeting. The lady on the other end said, “I’m calling from Sample’s, and I have her record of “I Saw Mommy Kissing Santa Claus. Would you tell her for me?” Brother Mose did not understand her message at all and said, “M’am, excuse me, what was it you said?” The lady politely repeated her words, but it still didn’t compute for Brother Mose. “Could you say that just one more time, please ’em (please M’am)?” Brother Mose was sure then what he heard but wasn’t sure how he would tell Mom with all those ladies present. Mom said he sheepishly came into the room and stood there for a few moments deciding how he would tell her. Mom said, What is it, Mose?” He said, “Mrs. Mo’ could I have a private word with you?” She was a little aggravated, but stepped into the hall way and again asked, “What do you want to tell me?” Mose said, “A lady from Sample’s called and said to tell you she saw you kissing Santa Claus.” Mom looked at Mose and said, “Mose, what in the world are you saying?” He repeated what he thought he heard, and suddenly Mom remembered her reservations for the record from Sample’s and had a good laugh. She said, “Thank you Mose for the message.” He seemed relieved that he got that potentially embarrassing message delivered in as discreet a manner as possible, and hopefully none of the church ladies would be any the wiser. When we got the record, I played it for Brother Mose a couple of times and told him I thought that the fellow was singing about Mom and how she got caught kissing Santa Claus. I don’t believe Mose ever thought it was funny and didn’t want me talking about it to anyone else.

6 thoughts on ““Miz Mo’, She Said She Saw You Kissing Santa Claus!””