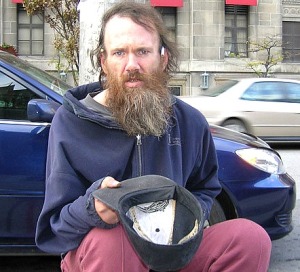 As a young teen from a small Southern town, I had no experience with life on the street in a large city such as Dallas and knew nothing about panhandlers. According to Dictionary.com the definition of “panhandler” is one who accosts passers-by on the street to beg money from them. I met my first panhandler on January 1, 1955 on a Dallas street corner. The incident impacted me for years, and I still  deal with attitudes toward the poor and homeless that were formulated in my heart that day.

I have posted of my love for the Arkansas Razorbacks which dates back to my Bubba playing football for the Razorbacks from 1946-1948. He was a high school All-American tackle for the El Dorado Wildcats, which resulted in a full scholarship to play tackle for the Razorbacks in the late 1940’s. He sustained a career-ending knee injury during his sophomore year and was unable to play in no more than 2 or 3 varsity games. Unfortunately I was never able to see him play in a Razorback uniform, but that did not dull my love for the team.

I was thrilled beyond words during the Christmas holidays in 1954 when the parents of a friend invited me to join them for a trip to the Cotton Bowl on New Year’s Day.  For the first time in years the Razorbacks had won the Southwest Conference title in football and received the automatic bid to play in the Cotton Bowl against Georgia Tech, the Southeast Conference champions. The invitation to see my team play in this huge game was a dream come true. We were to spend one night in a downtown hotel; attend the game which began at 1 PM and return to El Dorado the same day. The events which took place on the morning of the game have overshadowed in my memory all else that happened that day.

Following the 6 hour drive to Dallas on the eve of the game, it was difficult for me to sleep in a strange hotel, on a bed with a sagging mattress and the excitement of my first Cotton Bowl game streaming through my mind. I don’t remember sleeping at all, but arose completely refreshed and energized. Following breakfast I wanted to walk outside in front of the hotel and enjoy the noise of the crowd while joining in the standard Razorback cheer; “Wooo – pigs – sooie!! I didn’t stray far from the hotel entrance for fear of getting turned around in this unfamiliar setting and perhaps not being able to find my way back to my hosts before they left for the stadium. There were no cell phones then.

All of a sudden a bedraggled street person approached me and began speaking. He appeared to be in his 50’s in age; with a 2-3 day old beard and reeking of body odor, tobacco and cheap wine. He said, “Sonny, is there any way you can help me?” I felt compassion for him since I had seen Pop help and treat men like this in his medical practice in El Dorado. I meekly said, “I will if I can.” He said, “I haven’t eaten in 2 days and am so hungry. Could you give me some money for food?” I thought that was something I could do because Pop had given me 10 dollars for extra-spending money. That doesn’t sound like much, but $10 then would be equivalent to $50 today.

I reached into my pocket and pulled one of the two 5 dollar bills and handed it to this supposedly hungry man, and he grabbed my hand, shook it and thanked me 3 or 4 times. As I watched him disappear into the crowd which was growing larger, I assumed he was headed to some near-by restaurant to have his first meal in days. For the first time in my life I had actually been the agent of help for a hurting man, and the feelings I had deep within me were so gratifying. I kept thinking, “How great is this to feed a hungry man and see a Razorback game in the same day!”

Within 10 to 15 minutes the crowd within several blocks of the hotel was filling the sidewalks, and I was preparing to go back to the hotel when I spotted a scene that stunned me. Within 20 feet of me I saw this same man talking with 3 or 4 men, and thought he must be asking them for money also. I got close enough to see in his hand was a huge wad of money which must have represented several hundred dollars. I heard him ask the men how many points would they give him on the upcoming game. He was placing bets on the Cotton Bowl game and a small part of the money he was betting was 1/2 of the total assets of a 14-year-old boy who was trying to help him buy food! I did not have the courage to confront him for fear he might hurt me. If he would rob a kid, he probably would have no qualms about beating him up.

I went around the corner where I couldn’t be seen and cried for several minutes. My tears and broken heart turned to anger and resentment, and I told God I would never again in my life give so much as a penny to a street bum. The incident so scarred me toward the homeless and street-people, I kept that promise for years. Cathy has helped me immensely in this area because she has such a loving and generous heart for the disadvantaged. I am not as stingy as I was, but still not as generous as I should be. In thinking about what Jesus said about helping the helpless, He said, “As you have done it to the least of these, you have done it to Me.” Because my heart was pure that day in my intent to give, I believe Jesus credited it to His account. What that street gambler did with it was his responsibility.

3 thoughts on “A Panhandler At The Cotton Bowl”