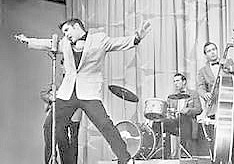 I was never a fan of Elvis Presley nor of the style of music that he and so many others like him made popular in the 50’s and 60’s. He was at the forefront of a music revolution that swept the nation and the world in the 1950’s, and his music is still being listened to and enjoyed 60 + years later. Living in Branson, Missouri we are annually treated to Elvis tribute artists and even Elvis look-alike contests, none of which Cathy nor I have seen.

Elvis died tragically on August 16, 1977 of a reported pain medication overdose, but there are still some who believe his death report was a hoax, and he is still alive. There have been reported “Elvis sightings” every year since his death, but these sightings are considered on the same order as UFO sightings, and reports of appearances of Big Foot. I am able; however, to report an actual Elvis sighting in El Dorado, Arkansas in 1955.

I was a sophomore in high school and was at the school early one spring evening practicing for a Latin play. I was such a nerd then I took Latin as an elective subject taught by Mrs. W.E. Durrett. The play practice ended at approximately 8:30 PM and several of us were leaving the campus and walking together to our vehicles. Our path took us past the auditorium, and as we neared we noticed the presence of a large number of parked cars and heard music coming from the stage. I asked one of my fellow Latin nerds what was happening, and he said it must be the concert scheduled that night. I couldn’t imagine what kind of concert this might be in our auditorium, because the music I was hearing was what we used to call honky-tonk. If one drove past The Howdy Club on East Hillsboro in the late hours on a Saturday night, the type of music we were hearing from the Wildcat auditorium was always being played.

With our curiosity peaked, several of us peered through a window at the stage and saw a most unusual sight. There was a band consisting of several guitar players, a bass player, a drummer and the main attraction at center stage. The performer was of medium height, with long black hair combed into a duck-tail and was wearing a green shirt and purple pants. His appearance was certainly unusual, but his music style and bodily gyrations were something I had never seen on stage. We listened for a few minutes, and my only comment to my friends when we left was, “I don’t think he’ll get very far with that kind of performance. Does anyone know his name?” Someone responded with, “I think it’s Elvis something or other.” I had never met anyone with the name Elvis.

Later that evening, perhaps at 11 PM as we were driving north on North West Avenue, we spotted an individual standing on the street corner holding a guitar case. As we got closer, I noticed the colorful shirt and pants, and recognized the performer we had seen and heard just an hour or so before. His location on North West Avenue was near 5th Street where the Canary Court used to be. It appeared he was hitch hiking, but we didn’t have any reason to pick him up since we were headed home, and it was nearing my curfew.

About one year later that purple-pants performer recorded “Blue Suede Shoes” and the career of Elvis Presley began to sky-rocket to unprecedented heights. No other performer in the history of popular music has ever come close to his world-wide popularity. Instead of calling his musical style honky-tonk, it became known as rock and roll, and his gyrations on stage were widely mimicked.

Elvis never returned to El Dorado to perform since his lone gig at the Wildcat auditorium would not have been considered an overwhelming success. I don’t know what he was paid, but it didn’t appear that he made enough for a bus fare out-of-town. I regret I didn’t at least pull over at the Canary Court; introduce myself and see if he needed a place to stay for the night. Who knows- he might have offered me a spot in his band since I was a guitar player. But then in those days when I did have hair, I couldn’t get it to combed into a duck-tail!

PS 1: So much for my prediction concerning the future of the purple-pants performer I saw on stage that spring evening!

PS 2: That course in Latin helped me more in my subsequent medical training than any other subject I took in high school.

11 thoughts on “An Elvis Sighting in El Dorado”