February 10, 1970 was an exciting day for Cathy and me. We had been anticipating the birth of our second child for 9 months and seemingly were better prepared than we were for our first. John Aaron our first, was born in 1967 in New Orleans during my second year of surgical training. I was very busy with my work and had very poor skills as a husband and expectant father. This was during the era prior to birthing rooms, and fathers were isolated from the delivery process. As a doctor I could have been present in the delivery room, but my attitude was I didn’t want to place added tension on the obstetrician, Dr. Sistrunk. In reality I was more concerned about my own anxiety, and Cathy was pretty much without my physical presence and support during her labor and delivery. I purposed to do better with our second.

I completed my surgical training in 1969, and Cathy and I moved to Valdosta, Georgia where I was assigned duty in the U.S. Air Force as a Major in the medical corps at Moody Air Force Base. The base hospital was small by Air Force standards, and I was the only surgeon which suited me well. There was also only one obstetrician; Major (Dr.) Henry Schilowitz, who was from New York City and had trained there. We had a very good professional relationship, and I assisted him on all of his major surgical procedures.

One of Cathy’s best friends, Flonnie McKoy was also pregnant with her second child and due to deliver in early February of 1970. Flonnie’s husband, Pete was the base veterinarian, and he was one of my good friends. Cathy went into labor in the early morning hours of February 10, and I drove her to the hospital which was about 10 miles from our home in town. We discovered when we got to the hospital Flonnie had already checked in ahead of us and she was a little further along in her labor than Cathy.

By mid-morning Flonnie was taken into the delivery room where Dr. Schilowitz managed her delivery process. By this time Cathy was far along in her labor and requiring significant pain medication for relief. There were 2 delivery rooms in the operating suite and Cathy’s nurse was telling us that they were going to have to move her very soon to that 2nd room. I called Dr. Schilowitz on the intercom and anxiously asked him if he was almost finished with Flonnie’s delivery. He said the baby was delivered with no complications, but Flonnie’s placenta had not separated, and he could not leave her. He said, “I guess you will have to deliver your own baby!” I told him there was no way I was going to do that except in case of a dire emergency. I had lots of experience delivering babies when I was an intern so that was not a concern, but I was not up to the emotional stress of delivering our little girl. I said, “Henry, you let me come in there and deliver that placenta, and you get over to Room 2 to deliver Cathy’s baby.” He laughed and said, “If that is what you want me to do!”

We moved Cathy into Room 2 and I scrubbed my hands to assist Flonnie in the completion of her delivery.  I was greatly relieved when Dr. Schilowitz scrubbed his hands and entered Room 2 minutes before Cathy delivered our baby. I was still in the process of removing the retained placenta when word came from a nurse, “You and Cathy now have a beautiful and healthy little girl!” If I were in a place where crying was appropriate, I would have shed a few tears of relief and joy.

Flonnie and Pete had their 2nd boy whom they named Brodie, and our 1st girl we named Mary Katharine. John Aaron said he was excited to have a sibling, but he had wanted a brother all along. Later I took him to the hospital to see his little sister, and after he poked at her a few times and she didn’t poke back, he thought she would be alright at least for the time being.

Cathy was kept in the hospital for 3 days which helped her recovery process, and I was a lot more attentive to her, both before, during and after the delivery. At least I was learning to be a better husband and father, but was still a major work in progress. The hospital sent us a bill for Cathy’s hospital stay, and the total was $ 7.68 which we were able to pay in full! Years later when Mary Kay was a teenager and causing some stress in the family which is common to all with teens; I jokingly said to her, “I guess you get what you pay for.”

Happy 45th birthday Mary Kay! It is fun for us to remember and tell of your birthing at Moody Field, although you don’t remember any of it. Despite your bargain basement cost to us in the beginning, you are an absolute priceless treasure to your Mom and me. But you sure caused some major stress to your Dad at the time of your arrival! 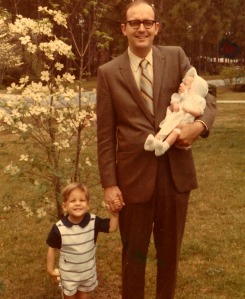 5 thoughts on “A Birthing at Moody Air Force Base Hospital”