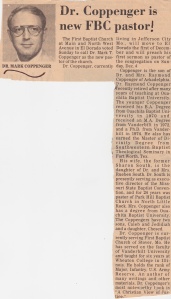 Over the past 30 years I have had the privilege of serving on four Pastor Search Committees in three of the churches in which Cathy and I  have been members. Two of the committee experiences were wonderful and resulted in the calling of pastors who were perfect fits for the churches. The other two experiences for me were disastrous. The very first committee on which I was asked to serve was perhaps the best.

Cathy and I moved to El Dorado in 1971 and soon thereafter joined the First Baptist Church without visiting any other church. FBC was my family’s church home, and the church where I was baptized as a young boy. The pastor Dr. Don Harbuck had been serving the church since 1962. There had been some stormy years for him in the mid- 1960’s because of civil rights issues that affected the church. His social views, which many considered liberal at the time involved inclucivism of all men into the life of the church regardless of race. His theological beliefs and teachings were also considered moderate among fundamental Baptists. By the time we joined Dr. Harbuck was well-liked among most who remained in the church, but there were a few who desired more fundamental teaching and a more theologically conservative church.

In January, 1983  Dr. Harbuck’s wife, Elizabeth died suddenly. She had been dealing with chronic illness issues for many months, but her death was a total shock for everyone and especially her husband. In June of that year Dr. Harbuck resigned his pastoral position to become Pastor of the First Baptist Church of Chattanooga, Tennessee. This was quite a surprise to most of his friends and church members in El Dorado, but many agreed a change might be good for him. A Search Committee was quickly formed and commissioned by the church, and I was one of 7 members voted onto that committee. Our committee voted unanimously for Rodney Landes, Sr. to serve as Chairman.

The majority of  committee members wanted a pastor very similar in education and theological beliefs to Dr. Harbuck, but I was one who desired a more fundamental conservative. The Southern Baptist Convention was deeply divided at the time, and the so-called “conservative resurgence” was in its’ early stages. All of the cooperating churches in the convention were deciding their future direction by their pastoral leadership.

Our committee reviewed approximately 100 resumes from pastoral candidates and narrowed the selection to several men. We decided to pursue our primary candidate until a final decision was reached regarding him and move to the next one if needed. The man heading our list was Dr. Mark Coppenger who had just completed his seminary training at Southwestern Baptist Theological Seminary in Fort Worth. He had no experience as a pastor, but had been a Professor in the Department of Philosophy at Wheaton College for 6 years prior to seminary. His doctorate in Philosophy was from Vanderbilt University. His academic training and credentials seemed to indicate a man who would preach and lead in a fashion similar to Dr. Harbuck. One of the committee members, Shad Medlin said prophetically in one of our meetings, “I believe in just a few short years Mark will be a well-known leader in the Southern Baptist Convention.”

My initial opinion concerning Mark was not as enthusiastic as the others. I had met him  2 years earlier during a Christian Focus Week seminar at Ouachita Baptist University. We were part of a panel discussion with students regarding right to life issues, and we had a few issues on which we seemingly disagreed. I was convinced Mark was much more liberal in his theology than I desired in a new pastor, but I kept that opinion mostly to myself during our early committee discussions.

On a Sunday morning in September we had a visiting speaker at church from Southwestern Seminary, Dr. Scott Tatum. It so happened Cathy and I had invited him to join us for lunch at our home, and our family enjoyed a wonderful visit with him. There was no discussion about Mark Coppenger during the meal, but on driving him back to his motel I asked privately if he knew Dr. Coppenger very well. For the next 45 minutes Dr. Tatum told me many things about him which I loved hearing. He said I had mistaken Mark for a theological liberal; in fact he said, “Mark Coppenger may be to the right of Jerry Falwell!” He told me other things about Mark’s character and leadership qualities I had not suspected. When I returned home I told Cathy I was a lot more excited about calling Mark as our pastor. I did not share my conversation with Dr. Tatum with the other committee members.

Our committee scheduled a trip to Stover, Missouri on a Sunday morning in early October to hear Mark preach and interview him during a luncheon meeting. Mark was serving the small First Baptist Church of Stover as an interim pastor. We were to fly in a church member’s large private plane and return home later that afternoon. In the early morning hours on the day of the trip a surgical patient of mine developed a complication requiring admission to the ICU. The problems were such I was not able to make the trip with the committee. Cathy and I scheduled a trip two weeks later for just the two of us to drive to Stover to meet with and interview Dr. Coppenger.

We met Mark and his wife Sharon at a restaurant in Jefferson City, Missouri on October, 15 for a 2+ hour meeting. I remember the date well because my birthday is October 12 and Sharon had delivered their third child, Chesed on my birthday and was strong enough to meet with us just 3 days later! Our meeting with them and then hearing Mark preach the following day in Stover firmly convinced Cathy and me Mark Coppenger was the pastor we were seeking.

The committee was unanimous in selecting Dr. Coppenger, and he was extended the call to our church with an overwhelming vote of affirmation by the members. He began his ministry as Pastor of FBC El Dorado in December, 1983.

The 5 years Dr. Mark and Sharon served the church were, in my opinion the best of any previous pastor in my lifetime. Mark’s preaching was solid and fundamental, while being both challenging and encouraging. The church grew numerically and spiritually, and the emphases on personal soul-winning, discipleship and personal involvement in missions were outstanding.

Cathy and I have maintained our relationship with our wonderful friends, Mark and Sharon Coppenger. They still challenge and encourage us, and I am so very thankful my initial impression of Brother Mark was not correct and Dr. Tatum’s assessment of Mark was spot on! Webster’s Dictionary definition of a fundamental conservative Baptist just might show a photo of Dr. Mark Coppenger.

6 thoughts on “The Calling of Dr. Coppenger to FBC El Dorado”