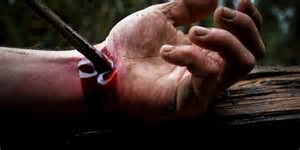 The Wrist Nail of Crucifixion

As Christ believers and followers it is important we understand as fully as possible the price He paid for our salvation and redemption. It is a simple statement to make, “Christ died for my sins,” but the depth of the cost escapes many. In about a  week all Christians will celebrate the holiday we call Easter, and for us the two most important days of the Easter weekend are Good Friday, symbolizing the day He was crucified, and Resurrection Day the following Sunday signifying the day He rose from the dead. Because He now lives all who believe and profess faith in the Lord Jesus have been redeemed, and one day our bodies will also be resurrected from the grave, and we will forever be in His presence. (I Thess. 4:17)

Not much is written in Christian literature about the methods and process of crucifixion which our Savior suffered, but I think it is important to understand a portion of the sufferings He endured for our sake. Crucifixion was not devised by the Romans but was used extensively by them for punishment and execution during the first century, and is arguably the most painful and horrific death sentence ever carried out. Tens of thousands were crucified by the Romans, and the guards responsible for carrying out the process became very skilled in their duties.

The prisoner was required to carry the cross-piece (patibulum) from the place of imprisonment to the site of execution. The cross-piece typically weighed between 75 and 125 pounds. The carrying of the cross-piece was made more difficult, because immediately preceeding the prisoner had been scourged or beaten with a whip called the cat of nine tails. This whip was made up of 9 leather thongs with balls of metal and sheep bones attached to each thong which would rip and tear the skin, soft tissue and even the bones of the back and legs. The extent of the beating depended on the disposition of the ones doing the scourging. Most would try to stop just short of causing death.

At the site of crucifixion the prisoner was stripped of his clothing, usually left naked and humiliated while being thrown on his back. His wrists were nailed to the cross-piece while his feet were nailed to the vertical part of the cross. Most pictures of the crucifixion of Jesus Christ show the nails driven through the palms, but this was not the case, because nails driven into the palms would have torn through the soft tissue of the hand due to the continuing weight of the victim. The nails which were 5-7 inches in length and about 3/8 inch in width were driven through the wrist between the radius and ulnar bones. At this position the nail was in constant touch with the median nerve or completely severed the nerve. The pain of this alone was excruciating (meaning derived from the pain of the cross). The irritation of the nerve sent continuing electric shock waves into the hand and out all 5 fingers. This is only one of many horrific pains suffered by the one suspended on a cross. It took our Savior 6 hours of enduring such humiliation and pain before He gave up the ghost. (Matt. 27:50).

Recently I had open heart surgery for a triple coronary artery by-pass and had a number of uncomfortable experiences during the prolonged pre-op and post-op periods. As a surgeon and one who has personally had multiple other operations, I was well-aware of most if not all types of pain which patients experience. There was one in particular of which I was not aware which was sudden, shocking and immediately reminded me of a tiny bit of what our Savior endured.

Prior to every open heart procedure a routine blood test done as a baseline study is an arterial blood gas. The blood specimen is obtained by an arterial puncture usually of the radial artery at the wrist. This was done on me the afternoon before I was to be admitted to the hospital. The phlebotomist (technician who draws blood) introduced herself and proceeded to accomplish the draw. Having been told I was a physician may have made her nervous, because her first attempt at the radial artery stick was not successful. While I held pressure on the puncture site at the wrist she felt for my pulse on the inner aspect of the arm at the elbow which on me is easily felt and bounding. She inserted the needle in the artery and got a blood flow, but then advanced the needle too far going through the artery and stabbing the ulnar nerve which lies just beneath the artery. I have never experienced such a sudden and explosive shock as the pain shot into my hand and the fingers. It felt as if blood had shot out the end of each finger. When I jerked back my arm reflexively she removed the needle from the site, and mercifully called for a more senior and experienced technician who completed the task on my opposite wrist.

When I walked out of the examining room my chief nurse told me he had never seen a technician miss an arterial puncture, so I felt I had set some kind of new unbreakable record by having 2 misses on me! I quickly recovered from the shock, but I will never forget the experience, because I was immediately reminded of what Jesus Christ did for me. The nerve pain he felt was not just for an instant but continuously for 6 hours. And this was a just small part of what He endured. Only God would do such a thing for a sinner such as me! I can’t even fathom such courage and such love, but I bless and praise His holy name!!

2 thoughts on “Experiencing One of the Pains of Crucifixion”