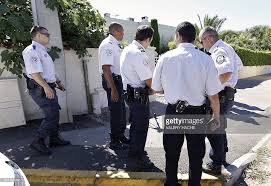 Officers on the Patio

I have written several blog stories concerning my favorite Aunt Tooky (Thelma Manne), my Mom’s older sister who lived in St. Louis; and some of the wonderful things she did for me. (Meeting Roy Rogers, Mar. 2013; The Quality Grocery Store, Mar. 2013; The Day I Met Stan the Man, Jan. 2019). I never made many trips to St. Louis during my formative years, but when I did it was an extra special treat. Aunt Tooky always made our time with her fun. In addition to her extroverted personality she lived in 2 very cool apartments with fascinating gadgets. It was at Aunt Tooky’s swanky Chase Apartment in 1949 where I saw my first television set and watched a television program for the first time. (I think the program was “Howdy Doody Time”!) No other member of my immediate or extended family owned a convertible, and I considered myself a very “cool dude” when riding around St. Louis with my Aunt Tooky in her two-door Dodge convertible. At that stage in my life I considered St. Louis, Missouri as the most wonderful city on the face of the earth! It was all because of Aunt Tooky, because now that she has departed, my view of the city has diminished considerably.

During Spring Break of my junior year at the University of Arkansas in 1960, I was home in El Dorado with a friend named “Sig” (Sigfrid Leijonhufvud) who was an exchange student from Sweden. I met Sig at the SAE Fraternity House where he was assigned by The International Student Affairs office to have noon meals each day. At the end of my junior year I was planning to make a 3 month summer trip to Europe just prior to entering medical school. I wanted to learn as much as possible about the culture and the people of Europe prior to making such a trip, and becoming friends with exchange students was a good way to accomplish such a goal.

It just so happened at the time Aunt Tooky was at our home for 2 weeks to visit Mom and her other sister (Aunt Lucille) and two brothers (Uncle Ed and Uncle Paul) who also lived in El Dorado. After meeting Sig and knowing what a kind and good young man he appeared to be, Aunt Tooky made the following offer to me, “While I am here in El Dorado, why don’t you and Sig and another one or two of your friends make the trip to St. Louis during Spring Break and stay in my apartment for a few days? Here is the key!” I was caught off guard by the invitation, and stunned she would make such an offer to a couple of college kids. I would never have thought about asking her for her apartment key, thinking that was way too presumptuous. But she did know what kind of person I was and trusted my friends were the same.

So within 2 days, Sig, Larry Mosley, Jim Weedman and I were headed to St. Louis in my ’57 Chevy with Aunt Tooky’s key to her exclusive and very elegant apartment. By this time she had moved from the Chase Apartments to a newer, larger and more modern apartment somewhere near Forrest Park. I don’t recall the apartment name, nor the address. This one had 3 bedrooms, 3 bathrooms adjoining a large family room with a marble fireplace. There was an extremely large marble bar with a well-stocked liquor cabinet in the family room. The master bedroom had massive floor to ceiling  windows and a door which opened onto a patio with a full sized swimming pool! Neither my friends nor I had every seen such a place; it looked like something out of a Hollywood movie.  We certainly never expected we would have full use of it for the 3 days left during our break from college. Another great gift from Aunt Tooky!

We arrived in St. Louis late in the day and went to some nearby restaurant for a meal; quickly returning to the apartment to relax and enjoy our new residence. We each may have had an alcoholic beverage from her bar (this was before I became a Christian), but there was certainly no rowdy behavior. We turned on her radio to play some music, but again the volume was not excessive nor intrusive. We were aware there were neighbors close by and didn’t want to disturb them. We each chose a bedroom and fell asleep around 1 or 2 AM after a long day of travel and excitement. We had no thoughts about the excitement which lay ahead.

Early in the morning just after daylight, I heard an increasingly loud tapping on the window of my bedroom overlooking the pool patio. As I fully awakened I was shocked to see at least 10 uniformed policemen on the patio looking directly at me lying in the bed. The one tapping on the window was using his service revolver and with sign language I fully understood, he ordered me to get out of bed with my hands in the air and come to the door!. I hollered to my friends to also get out of bed with their hands in the air and come to my bedroom. We were being arrested!

The officer holstered his weapon and asked with a very gruff voice, “Just what are you doing here?” He could easily see we were 4 terrified young men, and with a shaking voice and trembling knees I explained this was my aunt’s apartment, and she had loaned us the key to stay for a few days. “Can you prove what you just told me?, he asked in another gruff, unbelieving tone. “Yes sir, if you’ll allow me to make a phone call to my home in Arkansas, I’ll get Aunt Tooky on the line to explain why we’re here.” The policeman seemed to calm a bit as I was able to get her on the phone with him, and I even thought I saw a faint smile on his face when he told her how scared we looked, and the neighbors were the ones who had reported a “possible break-in”. Aunt Tooky then got on the phone with me and apologized for not alerting her neighbors we were coming, and she would call them to explain our presence.

I know the police were relieved they did not find hardened, dangerous criminals in the fancy apartment necessitating a gun battle, but instead found 4 shaken, underwear- clad college boys who were so scared they could hardly stand and talk. What an introduction to a life of luxury in St. Louis!

PS: The remainder of our stay in St. Louis at Aunt Tooky’s apartment was fun and void of police interference!

1 thought on “The Police Raid At Aunt Tooky’s”