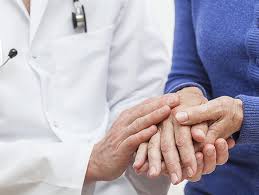 One of the more difficult things physician should learn early in their practice is how to professionally but lovingly tell a patient or a family member some bad news. It may be the report of a biopsy which is positive for malignancy when everyone was praying for a benign report. It is not easy to tell awaiting family members, “I was unable to remove all of the malignant tumor and the prognosis for cure is very poor.” The most difficult thing I had to do regarding my surgical practice was to tell a husband or wife their loved one had just died. There are no standard methods for delivering bad or tragic news, and there is no perfect place to go that makes it any easier either for the physician or the family. I have been on the giving and receiving sides of bad news reports, and having the right attitudes and the right words take on new significance. During my training years I watched as a few teachers and colleagues delivered reports to anxious family members in such a calloused and insensitive manner, and I learned some things I should never do or say. Those kind of attitudes and actions came from hearts which had never been broken, or perhaps from hearts that had been broken so often they had become hardened. I suspect the former was more often the case.

From the professional side an important and necessary function of the physician is  keeping the family well-informed of all available medical information and up to date the progress of treatment being given. My brother Berry Lee (Bubba) was one of the best medical practitioners I ever served alongside, and he had a wonderful bed-side manner. All of his patients loved and trusted him completely, and I was able to learn from him how to serve people when reports were bad and occasionally tragic.

Bubba had been the family physician of Henry and his wife Irene for many years, but I had not met either of them until Henry was in severe heart failure and a patient in the Intensive Care Unit. He was in his late 70’s in age and had been in declining health for the previous 5 or 6 years. In addition to heart disease he had diabetes and hypertension neither of which were under good control. His wife Irene was an excellent cook, and as a result of their poor eating habits both were at least 100 pounds over- weight. Bubba had me examine Henry in regarding a large, painful abdominal  hernia which needed to be repaired at some point, but his failing heart prevented a safe operation at that time. Over the next week Henry got progressively worse, and he became semi-comatose because of the lack of blood flow to his brain. Bubba was seeing Henry at least twice daily and keeping Irene informed and up to date on his critical condition, while assuring her that everything was being done to help his heart grow stronger. Irene spent most of her time either at Henry’s bedside or in the waiting room where family and friends would come for a visit. The only time she left the hospital was to go home for a quick shower and to put on a fresh dress. She could see Henry was getting worse each day, but despite the fact he was now comatose, she still believed the Lord was going to strengthen his heart and heal him. Bubba told her multiple times Henry might not survive this illness, and she needed to be prepared for his death. She would respond with the words, “I’m just trustin’ in the Lawd for Henry to get well.” Bubba would reassure her of the Lord’s presence with Henry, and he would continue to pray for Henry to recover and for Irene to have the “peace that passes all understanding.”

I was in the ICU one afternoon seeing another patient, when I noticed lots of activity in Henry’s room and suspected he had just died. As I entered the room, Bubba confirmed Henry had departed and asked if I would accompany him to tell Irene the bad news. The nurse said she did not know where Irene had gone, but suspected she had gone home for a short while. Bubba and I walked into the hall just outside the ICU and were planning to take her to a small adjacent room where we could have privacy. At that moment Irene came around the corner and seeing us together, immediately approached. In his usual quiet and gentle tone of voice, Bubba said, “Irene, we need to go into this room and talk. I’ve got some bad news for you.” He tried to lead her by  grasping her shoulder. She pulled back a bit and questioned, “Henry didn’t pass, did he?” Bubba hesitated, “Let’s go into this room–.” Irene persisted, “Did Henry just pass?” she blurted. “Yes Irene he did, let us go talk about it.” Before he could take a step Irene grabbed Bubba in a hug and with a scream of anguish let her full weight collapse onto him. He was not prepared and was so off-balance he fell to the floor with Irene falling on top of him. Henry’s medical chart flew out of his hand scattering in the hall and Bubba’s glasses were dislodged but fortunately not broken. I was stunned at the scene which had just unfolded and at first glance seemed comical except for the sad circumstance which had caused it. Fortunately I had enough composure to help them up and to assist Bubba in getting her into a private room where she could vent her full emotions. When she calmed a bit we were both able to pray, thanking God Henry was safe in His arms and asking Him to gently begin healing Irene’s broken heart. When we left the room, Bubba assured me he was not injured despite never having experienced such a thing.

This incident of bringing bad news to a loved one taught me to be flexible in every situation, because one never knows how that one might respond. A physician must have a professional demeanor, and I discovered it is not a sign of weakness or unprofessional conduct to occasionally cry with a patient or family member. Every sincere expression of loving-kindness is needed, but in the best interest of family or physician it is better not to get pulled to the floor while doing so!