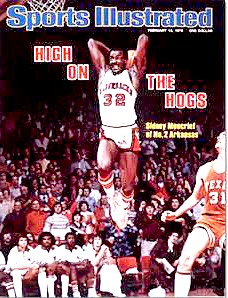 When I was an undergraduate at the University of Arkansas in the late 1950’s the basketball team was pretty uninspiring, and I was not alone in my assessment. Our fraternity required all freshman pledges to attend the home games because the attendance at Barnhill Arena was so poor. On a good night there would be less than three thousand in attendance, and this number included the student body who would be loudly cheering for their beloved Razorbacks. Coach Glen Rose was a good coach, but his talent pool was not able to regularly compete in the Southwest Conference. He was followed by two coaches, Duddy Waller and Lanny Van Eman who collectively coached from 1967 through 1974. Arkansas basketball needed re-vitalization, and it came with the hiring of Eddie Sutton in 1975.

Coach Sutton was a disciplinarian and drilled sound basketball fundamentals into all of his players. There was no shot clock in those days, and the game was slowed to the extent where many games were won when a team could score 40 points. There was a premium on ball control and pin point shooting, especially free throws.

In his second year of coaching at Arkansas he recruited three players from Arkansas who helped transform the Razorbacks into a national power. They were Marvin Delph from Conway, Ronnie Brewer from Fort Smith and Sidney Moncrief from Little Rock. They later became known as “The Triplets” and individually set Razorback records for scoring, rebounding and assists.

Their first year together they led the Razorbacks to the NCAA Regionals, only to lose in the first round to Wake Forest. The following season was their best, and they made it to the Final Four which was played in late March, 1978 at the Checker Dome Arena in St. Louis, Missouri.

As soon as I knew the Razorbacks were in the Final Four I called Uncle Harry Gosling who lived in St. Louis. Earlier he told me he was best friends with the facilities manager of the Checker Dome. I asked if he could get four tickets for the games through his friend, and he thought surely it would be possible. I anxiously awaited his call the following Monday, but Uncle Harry sadly reported the words of his friend, “Harry, if my own mother wanted tickets for the tournament, I couldn’t get them. They’ve been sold out for almost a year!”

After asking several friends in El Dorado if they had any connections to get tickets I remembered Russell Marks would be a good source. His dealership, Marks Ford Company supplied the use of a new vehicle each year to the Razorback coaching staff, and he was a personal friend of Frank Broyles, the Athletic Director. Mr. Marks told me he didn’t have tickets, but I must have lots of confidence in his ability to secure tickets. He said, “I’ll take this as a big challenge and see what I can do!”

Several day later he called to say he had quite an experience in his ticket search and was only partially successful in the quest. He couldn’t get tickets through the Razorback Athletic Department but had gotten not four but two tickets from the President of St. Louis University who was also a personal friend. Mr. Marks apologized for his inability to get the four tickets I had requested, but said, “I think you’ll like these two because they are really good seats.” Indeed we discovered later how successful was his search. The two seats were on the second row behind the home bench, because they were the personal seats of the President, whose team, the St. Louis Billikins played their home games in the Checker Dome.

The Final Four games were played over the Easter weekend, and because Cathy’s Mom and Dad were visiting from Fort Lauderdale I thought it would have been rude for John and me to leave and be absent on Easter Sunday. We gave our two tickets for the Saturday games to the El Dorado Wildcat head basketball coach, Jim Atwell so he and a guest could attend the semi-final games. John and I scheduled a Monday flight to St. Louis so we could make the final game which was on Monday night.

We were hoping the Razorbacks would defeat the Kentucky Wildcats on Saturday and  play for the championship on Monday night, but it was not to be. The Wildcats had some very large and talented players, and they muscled their way to a 64-59 victory with aggressive rebounding and accurate shooting. The play was so rough one of our forwards, Jim Counce had to be hospitalized following the game with an injury to his kidney.

In those days there was a consolation game so we were scheduled to play Notre Dame on Monday night prior to the championship game between Kentucky and Duke. Although John and I were disappointed in not getting to see our team play for the title, we would see a great game with Notre Dame and then watch the National Championship game live! We arrived at the airport and Uncle Harry met us and took us to our motel room. We were to call him following the game and he planned to drive us back to our motel which was several miles away.

We were very excited by the crowd and the noise outside the arena, and fans from Kentucky and Duke were anticipating their team would win the grand prize. I approached a man holding two fingers in the air and  asked him if he had two tickets to sell to which he replied, “No, I want to buy two!” I asked what he was willing to pay, and he said, “One thousand dollars apiece.” I felt those expensive tickets in my coat pocket and for a brief moment considered making a quick two thousand dollars and going back to the motel to watch the game on television. I knew however,  Mr. Marks would discover my deceit before we got ever back to El Dorado.

The game was everything predicted and even more. Near the end of regulation time the game was tied, and we had the ball on our end of the court with only ten seconds left. There was a timeout called while the coaches planned their strategy. My heart was beating so hard I asked the man next seated to me if I had a heart attack would he please see John got back home! He laughed and said, “Don’t worry Doc. You’ll both make it fine.”

Ron Brewer got the in-bounds pass and walked the ball down court with the fans of both teams loudly screaming. When he got to the top of the circle and there were two seconds left on the clock he quickly shot a jump shot that hit the bottom of the net and we won the game. It was the most exciting basketball game John and I ever saw together. And yes, we both did make it! I survived the heart scare and John got back home.

PS: Kentucky beat Duke, so at least the team which beat us was the national champion!

PS 2: Fast forward thirty-eight years and Dr. Jim Counce, noted heart surgeon in Fayetteville who was injured in the Arkansas-Kentucky game performed an open heart triple coronary bypass operation on me in 2016. I not only survived but did well and have not lost my enthusiasm for Razorback basketball.